We're sorry but the candle you have selected is currenty in the process of being purchased or has just recently been purchased.

Please feel free to select another candle or check back in 15 minutes to see if the candle you have selected has been released for purchase.

We're sorry but there are no candles available for lighting.

You have already begun a candle purchase session. If you would like to continue with your current candle choice please click "Continue" otherwise please click "Select Another".

In Memory of
Wendell Bruce
Whitter
1960 - 2018
Click above to light a memorial candle.

The lighting of a Memorial Candle not only provides a gesture of sympathy and support to the immediate family during their time of need but also provides the gift of extending the Book of Memories for future generations.

In the event that there is an error
in the information presented,
please contact the funeral
home by clicking here. 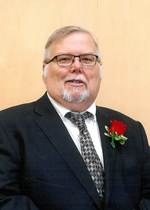 Wendell Bruce Whitter
June 6, 1960 – July 13, 2018
Wendell Bruce Whitter, went to be with his Lord and Saviour, on Friday, July 13, 2018. Wendell was born to Doug and Signe (Hansen) Whitter, on June 6, 1960, in Prince Albert, SK. He lived in Prince Albert, and on 9th Street for most of his life. Wendell spent his first working years in the family business, The Hill Grocery, moving on to work at Carments Jewelers in watch repair, Rugged Country, Saskatchewan Rivers School Division, and MacKenzie Funeral Home. Wendell married the love of his life, Valerie Jean Hickerson, on June 29, 1984, and they subsequently had one son, Kristian, who was born on April 3, 1987. Wendell and Val recently celebrated their 34th anniversary. Wendell was a family man, to whom family was very important, and his family extended far and wide. He stood as a father figure to many young men. He will be greatly missed by many. He was very involved with his church, the Prince Albert Gospel Assembly, and served first as a Deacon, and most recently, as an Elder, sharing his passion for Christ, and his compassion for those in need in the church as well as in the community. Wendell had a passionate interest in sports, particularly archery, which his son Kristian got him involved in early on. Wendell was an active volunteer in the community for all of his adult life. Most recently, he was very involved in PA minor Football, coaching the River Riders team. As the Vice-President of the organisation, he was very passionate about the sport, and being a mentor to the young sports enthusiasts. Wendell leaves behind his wife: Valerie; his son: Kristian, and his wife: Lindsay (nee Walker); his brother: Randy, and his wife: Carol, and their children: Adana (Cris) Thorn, Amanda (Jason) Hartman, and Alexandria (James Debnam); his great-nephews: Cohen and Connor Hartman; his sister: Brenda; and numerous beloved aunts, uncles, cousins, and friends. In lieu of other tributes, donations may be made to the charity of the donor’s choice. A Public Visitation will be held Wednesday, July 18, 2018 – 7:00PM, at MacKenzie Chapel. A Funeral Service will take place Thursday, July 19, 2018 – 2:00PM at Plaza 88, 888 Centre Avenue, Prince Albert, SK. Arrangements in care of MacKenzie Chapel & Crematorium – Shellbrook Funeral Home. Brian and Bev Stobbs, Renée Phaneuf - Funeral Directors. www.MacKenzieChapel.ca 306.763.8488

To send flowers to the family or plant a tree in memory of Wendell Bruce Whitter, please visit our Heartfelt Sympathies Store.

This Book of Memories brings those affected by loss together by encouraging communication and self-expression. By giving friends and family a special place to tell their stories and express their feelings of loss, it helps them care for one another during a very difficult time. Click on any of the links to the right to access features or information within this memorial website.

365 Days of Healing
Grieving doesn't always end with the funeral: subscribe to our daily grief support email, designed to help you a little bit every day, by filling out the form to the right.

52 Weeks of Support
It's hard to know what to say when your loved ones experience loss. Our weekly newsletter provides insights, quotes and messages on how to provide help during the first year.