To share your memory on the wall of Darlene Schmid, sign in using one of the following options:

To send flowers to the family or plant a tree in memory of Darlene Shirley Schmid, please visit our Heartfelt Sympathies Store.

There are no events scheduled. You can still show your support by sending flowers directly to the family, or planting a memorial tree in memory of Darlene Shirley Schmid.
Visit the Heartfelt Sympathies Store

We encourage you to share your most beloved memories of Darlene here, so that the family and other loved ones can always see it. You can upload cherished photographs, or share your favorite stories, and can even comment on those shared by others.

Posted Apr 27, 2021 at 02:32pm
Norbert and family, Gaylord and family, Bonnie and family. We are so sorry to learn of the passing of Darlene. Our hearts go out to you in this time of sorrow. Please know we are thinking of you and wishing you comfort and healing in the days ahead. With deepest sympathy, Dennis and Joyce Butler
Comment Share
Share via:
DD

Posted Apr 26, 2021 at 04:20pm
My condolences to all the members of Darlene's family....husband, brother, children and grandchildren...and more. May the memories you made with her last you a lifetime. May her spirit remain with you. Sincerely, Donna Dahl
Comment Share
Share via:
GM

Posted Apr 25, 2021 at 04:21pm
Norbert and family....sorry to heard the sad news. Sending condolences to all the family. We will fondly remember Darlenes smile and hardy laughter. Glen and Joyce
Comment Share
Share via:
L

Posted Apr 24, 2021 at 11:55pm
My sincere condolences to Darlene’s family in their loss! I enjoyed my chats with her anytime I was at Cherry/Western to do business! She was a great lady.
Comment Share
Share via:
BS

Posted Apr 24, 2021 at 02:04am
We will miss Darlene, dearly! I will miss chatting with Darlene on our many FaceTime phone calls, enjoying her chocolate cake and caramel icing, hearing her grandchildren call her "Nanny" and reminiscing fun times from family gatherings. Darlene displayed strength to "go on" even when her body was tired and struggling. You will always be in our thoughts as you join other family members in God's heavenly kingdom. Our deepest condolences to Norbert, Jodi and Jason and family and extended family.
Lots of love from Bob and Bonnie
Comment Share
Share via: 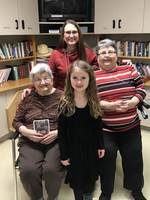